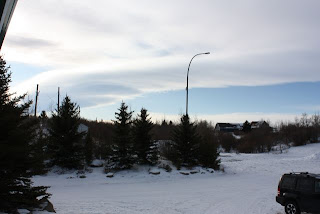 On Sunday i wrote about our cold -31C.

Well, a chinook has blown into 'Cowtown' area and we are now sitting at +2C.

The picture above shows what the typical Chinook arch looks like.

"The Chinook is a rain shadow wind which results from the subsequent adiabatic warming of air which has dropped most of its moisture on windward slopes (orographic lift). As a consequence of the different adiabatic rates of moist and dry air, the air on the leeward slopes becomes warmer than equivalent elevations on the windward slopes." (Wikipedia) *I live in the Canadian Rockies*

I am on the leeward slope...so what does this mean for us??

A nasty headache (from the quick pressure change), wicked winds (up to 120km/h) and a rise in temperature. We lovingly refer to chinooks as "snow eaters", because that is exactly what they do. I've seriously encountered days where the temperature started out at -25C and ended at +20C. That's a HUGE change!

How long a chinook lasts is willy-nilly... but man, it is soooooo hard to go back to those low negative figures when it's been a balmy day in the middle of winter. Just as you get used to the chilling temps, a chinook blows in and ruins you!

That concludes our weather lesson for the week. We should be good now until oh.....June? Winter pretty much lasts until then!

Do you have any interesting weather anomalies where you live?

SamiJoe*ps~ during a chinook my children have a tendency to be completely psychotic. Teachers at school even say those are the worst days for all the kids. It's lovely.

Realm of Fieldings said…
towards the end of November and into late December we get a whole tonne of ice fog coming off the the unfrozen parts of Great Slave Lake. This fog builds the awesomest hoar frost on our trees, vehicles, houses, anything that's outside!

Sonya said…
Wow thats a beautiful picture!! I've never heard of that before. I had to laugh when I read about the poor kids..lol

We dont have stuff like that here..not that I know of..ok Im gonna go see if we have some different weather occurrence
December 16, 2009 at 10:45 AM

Outnumbered said…
I actually really miss the chinooks, lol. Enjoy it for me, will ya?

Unknown said…
Well, this one is particularly windy! But sure, i'll try to enjoy the headache for ya!

D'Anna said…
I never heard of a chinook, thanks for teaching me something today!
I can relate to the headaches when the baro pressure changes . . . didn't really believe in all that until I lived through it here in Russia!
Here we have "ini" - it is probably in most cold/humid places - it is when the humidity is high and really cold and the snow lightly freezes on the trees . . . like little rows of snowflakes all over everything - just beautiful!
We have a balmy -24 C today! Enjoy your warm spell!
December 17, 2009 at 2:15 AM

audreyscountrycrafts said…
This has been an interesting year. We had 9 months of below normal, then 1 month of above normal, 1 month of below normal again, now it's getting a little warmer. So what is "normal"?
Have a very Merry Christmas!!

Tara said…
I totally think the pressure would have an effect on the kids! (Keep in mind, I work in the Court system and everyone has full moons marked on their calendars!)
December 17, 2009 at 5:51 PM

Unknown said…
Oh wow... you did a much nicer post about our "chinook day" than I did. LOL