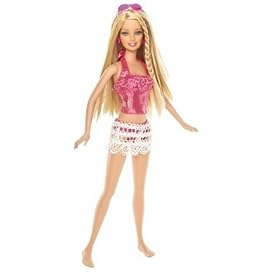 I had never really given much thought to Barbie dolls. As a child, i played with some dolls like Barbie (they were my mom's), but never had 'real' Barbies. For the most part, i was a tomboy who enjoyed playing 'Cops & Robbers' with the neighbourhood boys, so the dolls never really had much play.

I vaguely recall hearing/reading about Barbie and how as a little girl, playing with these dolls, you might want to be her in all ways! Barbie is the gateway doll to other things, such as anorexia and bulimia (don't you know? lol). She might also personify perfection, thus making most pre-teen girls feel like cr*p.

Not like Mattel hasn't tried to expand the Barbie line to more properly reflect today's realities. Enter, Tattoed Barbie & Pregnant Midge. The Tatted Barbie *might* make your child want a tattoo, sigh (unexpectedly, she's selling ok with little complaints). In my head i am thinking... we'll probably go down that road anyways, so right, okay. However, Midge was actually pulled from the shelves, despite her being part of a collection of Barbie's called, "The Happy Family Line". A Barbie that is pregnant by her hubby should be a fine and dandy ideal, but parents complained that because the doll was sold separate from the other family members, it sent the wrong message. They also believed the doll would lead to other questions about the finer details of 'where do babies come from?'
People will complain about anything it seems, hard to please everyone.

Like i said, never gave the whole Barbie thing much thought. Until i asked my daughter what she would like for Christmas and a Barbie is what she said. She currently has a few tiny Disney Princesses that have all fallen apart. They came with little dresses to dress them in, but for a 3 year olds tiny fingers, the dresses have proven difficult. Played to death with, they are broken and the time has come for new dolls. Since we don't have any Barbies, i wondered where she knew of them?
At school, unseen to MommyO and DaddyO, Beebo and her gals play with Barbies. So, the Barbie playing has begun and she likes it. The dresses are bigger and easier to put on; they have real hair to brush. They even *gasp* make Disney Princesses in Barbie-size, adding to the fun.

Well, last weekend, DaddyO and MommyO had a bit of a date night. On our way to our night of fun, we decided to do a little Christmas shopping (Read: i almost never get to see the toys before buying because i do so much online shopping! Why take two kids to ToysR'us?? Shipping is not that expensive and results in no meltdowns at the cash register by said children). We were there to get a Barbie or two, but found ourselves to have become....um, how shall we say it??

"When did Barbie start looking like such a sl*t!?" said DaddyO.
We tossed Barbies aside with reckless abandon....we did not want these Barbies for our daughter!! Of course i'd expect to find a Barbie (or two) dressed in a bikini--as in, "Beach Barbie", but we found LOTS. Some Barbies wore such little clothing, or such trampy clothing rather, that i was actually disgusted.

Was Barbie always like this and i just never realized?

Finally, those things that you just don't get as a child, all made sense. This is what critics of the Barbie doll saw! My child-eyes could never have seen and realized how inappropriate most of the Barbie dolls actually are.

We did find a Barbie doll to come home with (shh...can't let Beebo find out!), but had a good laugh at how strongly our feelings were about doll clothing--LOL! And perhaps, just perhaps, this was our first real moment where we realized WE ARE parents.

Only took buying some Barbies to knock it all in!

SamiJoe
*ps--overanalyzing a child's doll is really silly. i struggle to not think about these kinds of things. she just wants to play with it and that is ok. *

kate said…
Which one did you get. Elissa came to me with a Toys R Us flyer before her birthday with her eyes lit up. LOOK MUM - It's Barbie and she's an animal doctor LIKE ME!! And she went on and on about animal doctor barbie. She wants to be an "animal doctor rescuer" when she grows up.

And so we have "pet vet barbie" now, and even though I think Barbie would be more comfortable being a vet in jeans, she has a denim skirt and knee high boots... but oh well, so does Elissa.

Like you I wasn't a Barbie kid. I played them with friends sometimes, but never had my own. I just wasn't into that, and I would have prefered something else. I already try to minimize the whole Disney Princess influence - That I just don't get at all. But Elissa has already proven to be far more girly than I ever was so I'm learning about pink and fairies and fashion from my four year old.
December 1, 2009 at 7:53 PM

Unknown said…
Yep, Beebo is much girlier than i ever was. Aren't we the 'hat' girls??
I hate how the Disney Princesses make them want to get married and all that. Lots of time for that still.
But ya, wasn't so much what the Barbie was---she was barely clothed. Slightly annoying.
December 1, 2009 at 8:18 PM

Dee said…
I also was at Toys R Us over the weekend and wandered through the Barbie section with Lauren. I tried to nudge her toward the animal doctor Barbie, but she would have none of it. All she wanted was the Bride Barbie. At least she was fairly covered up, lol.
December 1, 2009 at 8:53 PM

Unknown said…
I really enjoyed your website! Your blog is wonderful reading. Have you heard of Danny the Dragon? One of my favorites, and worth a visit as it is the nominee for Best Children’s Picture Book of 2009! http://DannyTheDragon.com
December 2, 2009 at 12:15 AM

Unknown said…
Thankyou Imagination! Thanks for stopping in!
I haven't heard of 'Danny the Dragon' but will for sure check it out!
December 2, 2009 at 8:58 AM

Realm of Fieldings said…
i had a few barbies when i was little but i seemed to grow out of them by the time i was ten...i still have them and a bunch of the clothes too if you want me to send them for little peach i can do that! they're pretty reasonable clothes if i remember right...barbie has definitely gotten sl**ty over the years!
December 2, 2009 at 3:00 PM

Mockabee Seven said…
Aye... I haven't even thought of Barbies yet, but will eventually have to head that direction... I couldn't agree more...most of those are dressed so trampy! :-)
December 2, 2009 at 3:01 PM

confused homemaker said…
We are a Barbie free house. Not just because she dresses like a tramp 99% of the time but I can't stand the thought of all those little shoes & other Barbie items being found throughout the house. I don't why it's so hard to show positive women to young girls who wear skirts that cover their arsses you know? She could still rock it.
January 30, 2010 at 9:24 AM