Kat at Today's Cliche (if you haven't checked it out, it is a fab his/her blog!) was asking how i acquired the name 'SamiJoe'. So i thought this might be a great way to introduce myself to all of my newcomers !!

Did you know that her 'breakout role' was playing a character named, Sammy Jo Carrington on the show Dynasty (1981-1989)?

Well, being a child born in 1977... with the name 'Samantha', my mother lovingly adorned me with this nickname (at least i HOPE adoringly, i don't know much about the character!). Let's just say she was a fan of Dynasty. No one called me this name at school; nor anywhere else. Just my mom.

Fast forward to years later, when i needed an online Username. SamiJoe just seemed to fit. Obviously the spelling is different (Sammy Jo vs. SamiJoe); however, there is just something not me in Sammy. And Jo just didn't seem quite finished. I also dropped the space entirely and added an 'e' to Joe.

I guess i'm allowed to spell it however i want i have no real reasons for changing the spelling of my nickname at all. I guess i would hate for people to think i call myself that, because i think i have any likeness to Heather Locklear at all! LOL I am definitely NOT nicknamed SamiJoe because i look like her. See? 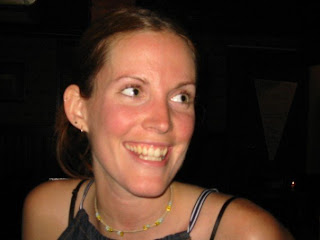 That said, she's not a bad looking chiquita to be nicknamed after. Except for maybe THAT hairdo.

Ashley said…
So, does everyone in "real life" still call you Samantha or has SamiJoe evolved? I think it is cute. And I totally think you should adopt that hair-do too!
May 15, 2010 at 10:32 AM

Formerly known as Frau said…
God I remember Dynasty back in the day! I love the name Sam very cool. Funny how you have names only some people call you. I'm a Kathleen and only family and some old friends call me that. My husband is the only one calling me Kath and every once in a while someone calls me that and it seems weird...I'm mostly just Kathy and of coarse as of last 2 years Frau. I love making up my own nick names for people my daughter can't keep straight when I'm talking to her. Have a great weekend...SJ!
May 15, 2010 at 11:16 AM

Lee Ann said…
Lol I always forget that you aren't actually called Sami! I guess it is because I have never actually been around you in real life to head you be called anything else. I only remember you are usually Sam when Keri addresses you on the birth club. Because she foes know you irl.

Kelly @ City Mom said…
I love this story. I love nicknames that have meaning!

TheFitHousewife said…
Thanks for clearing that up ;) I like the nickname, I think it suits you! I'm known as Jenny to my childhood friends even though I'm not a fan if the name.
August 26, 2011 at 3:16 PM