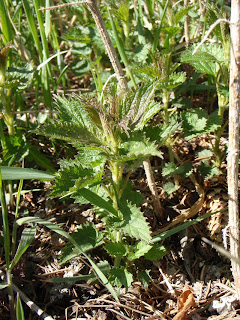 Last year, we found a patch of Stinging Nettle on the property. By the time we found it, it was in full-bloom horror! Luckily, where it was located was not out in the open, so we decided to let it die out and deal with it this season. (I know--soooo proactive of us, but have you ever seen this plant in full-bloom?? Think 'mini-daggers'.)

"Stinging nettle is a dioecious herbaceous perennial, 1 to 2 m (3 to 7 ft) tall in the summer and dying down to the ground in winter. It has widely spreading rhizomes and stolons, which are bright yellow as are the roots. The soft green leaves are 3 to 15 cm (1 to 6 in) long and are borne oppositely on an erect wiry green stem. The leaves have a strongly serrated margin, a cordate base and an acuminate tip with a terminal leaf tooth longer than adjacent laterals. It bears small greenish or brownish 4-merous flowers in dense axillary inflorescences. The leaves and stems are very hairy with non-stinging hairs and also bear many stinging hairs (trichomes), whose tips come off when touched, transforming the hair into a needle that will inject several chemicals: acetylcholine, histamine, 5-HT or serotonin, and possibly formic acid. This mixture of chemical compounds cause a sting or paresthesia from which the species derives its common name, as well as the colloquial names burn nettle, burn weed, burn hazel. The pain and itching from a nettle sting can last from only a few minutes to as long as a week ." (Wikipedia)

This season is here and the nettles are back. We need to do something about it and this is where i'd like your opinions. Especially if you have had to eradicate this nettle before. 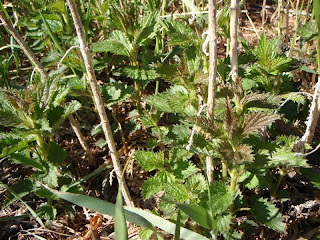 At the moment, the Stinging Nettles are small and few in number. I do not normally kill my weeds with chemicals, but i am considering using 'Round Up' or a similar NON-SPECIFIC weed killer. Unfortunately, using a product like that will kill everything in the area... but i am afraid that if i ONLY dig them out, i'll miss some and have to deal with this again!

What would you do?

Rebecca said…
I would rent a tiller from Home Depot or Lowes if they rent those, and I would till that ground every couple of weeks, and I would also add weed killer to the dirt, just to make sure NOTHING grows....and next spring....I would plant a weed & feed (kills the weeds and feeds the grass) with lots and lots of Zoysia grass. Zoysia grass chokes out many different weeds. It grows very thick and almost feels like plush carpet after it's been growing for a few seasons.
May 13, 2010 at 11:22 AM

Kelley said…
we haven't battled stinging nettles, but the poison ivy/oak are our rivals around here. I use a brush killer and use a direct stream to spray the leaves. The brush killer works to kill the hardy growth, and the direct stream spraying means that I save more of the non-harmful growth.

Keri said…
I may just be talking out of my butt here, but what about digging a small hole around the base and then pouring freshly boiled water into it?

Melani said…
Rebecca has a great idea, but if you can't rent one then I would get the round up and kill the lot and start fresh when they are outta there! Good luck!
May 13, 2010 at 3:34 PM

Heather said…
Ohhh....if I had stinging nettles, I'd harvest them! I pay dearly for a tea made of organic stinging nettles....I use it to help with water retention and digestive health. Some sufferers of arthritis use it for pain relief. I know this doesn't help you, but that's what I'd do.
May 17, 2010 at 7:02 PM

Anonymous said…
Just want to say what a great blog you got here!
I've been around for quite a lot of time, but finally decided to show my appreciation of your work!

Thumbs up, and keep it going!