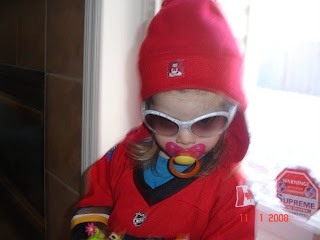 I remember this day well. Beebo was getting a tooth and was NOT a happy camper!! (this picture is from before her brother came to live with us) I had taken her with me to the doctors, which ended up being a super long visit... we did not get back into the car in time for naptime, so she didn't sleep for that long. When i got her home and took her out of the car, THIS is how she stayed for over 2 hours! Normally, the paci was for sleeping only--but on this day, every time i tried to take it from her she shrieked and showed me her claws, just.like.a.cat! The hat and sunnies were not coming off and neither were her boots. Very grouchy day!

Today seems to be a deja vu moment of that day. 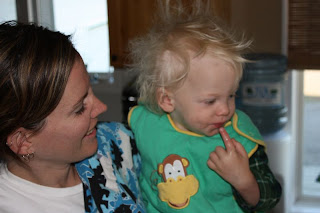 Xman has been complaining of a sore throat this week. So he's been shooting Apple Cider Vinegar for the last few days and we've managed to hold off further illness. (MommyO has also been chugging it back) This morning when i heard him wake up, he was moaning and making some rather odd noises... so i went to retrieve him. He sleeps in a Grobag; like a sleeping bag, but the baby/kiddo wears it so that they stay warm. Eventhough he sleeps in a big boy bed now, he still prefers to be snuggled in this bag. Who am i to argue? He is a blanket kid and just loves being cuddled!
Anyhow, he kept refusing to take the Grobag off. I even just unsnapped it thinking that perhaps that wasn't what he was trying to tell me and he got furious! I quickly snapped it back up and left it on. Hmm...? His sister was not awake yet, so we went back to my room to watch some tv. A few minutes later, he threw up all over MY bed.

Lesson learned today? My kiddos are very good at telling me exactly what they do and do not want to do. Apparently, i am a terrible listener. I should not have complained about all the laundry his sister causes me daily at all yesterday! I got mine today--with baskets of laundry to boot.

Krystyn @ Really, Are You Serious? said…
Oh, we are fighting with the paci, too, and I'm totally giving in.

supahmommy- somethin's wrong with that girl said…
All over your bed.. ughhh