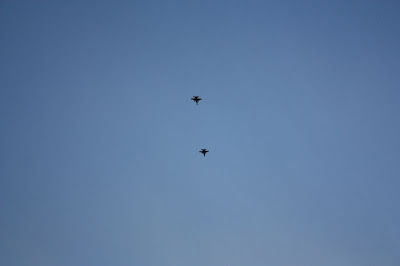 We became lucky viewers of some serious aerobatics late Sunday afternoon. We heard them long before we saw them. Then, 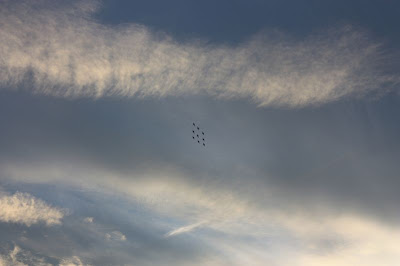 they stuck around for a good twenty minutes!!
Right. Over. Our. House!!!
So exciting! (i LOVE planes!)
.
The CF-18 Hornet Fighter Jets were mighty loud (1st picture) and the famed Canadian Snowbirds (2nd pic) were gorgeous as ever, especially highlighted by an early evening sky.
.
It did take us a few minutes to clue in that these planes were here to open the Grey Cup 2009 and not for our own surprise viewing, lol! We quickly turned on our television to the Grey Cup, where they were just starting to sing the National Anthem. The Snowbirds and Hornets all came back together from their various tricks and again, centred right over our house--- at this point we began timing them, knowing that we are pretty much directly north of where the game was being played.
.
Not even 15 seconds later, there they were on tv, doing a low level fly-by, ushering in the start of the Grey Cup!
.
YAY! WOW, what a pre-game show for US!!
.
AND, what a game it was!
.
The Montreal Alouettes pulled off a beautiful finish to a well played game, beating the Saskatchewan Roughriders in the final seconds 28-27!
.
I have to say, while the newspapers are calling this one of the best Grey Cup games in its 97 year history, i KNOW for certain it'll be the one that we don't forget at our house!
.
SamiJoe