So let's just do this straight up- what i like about what i like. I could tell you exact stats about the newest Explorer, but really i am not well versed in automobile lingo and do not want to 'fake' it. I could discuss horsepower and pistons, but almost no Mommy i know cares. 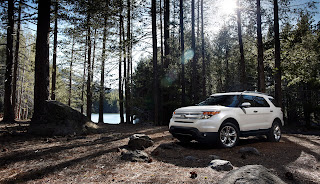 The number one" Mommy Question" i received about the Ford Explorer was: Can it fit THREE carseats in the back?
You can certainly fit three carseats in the back- in the same row, hard to say?  In the model i had, we enjoyed a 2nd row with two bucket seats. A carseat in each is totally do-able (and we did with our two). The third carseat would have to go in the 3rd row in this model. The 2011 Ford Explorer does offer a 2nd row bench where it might be possible to fit three carseats in this row;  however, three kids in carseats in the 2nd row bench seat might be pushing things just a bit (squabble*crying*headaches).  Just sayin'...
The Technology: The My Ford Touch system definitely took some getting used to (Hello, my car is talking to me??). At first, i considered it a bit of a nuisance; however, that was only in the initial first uses and once i was more familiar with where to find things, its distraction level lessened. I was capable of sync'ing my phone with the My Ford Touch for hands-free use,  but honestly i never did because the more basic needs (climate controls, music, GPS etc) were enough to sort out. I will be reviewing another Ford vehicle in a few weeks time that also has the My Ford Touch feature. This time, I will be sync'ing my phone right away and doing a more thorough investigation of this tool.  Ford hopes that by sync'ing your phone into the system and making things more hands-free while driving, our roads and passengers will become much safer. And anything less to do while driving (save handing snacks to screaming toddlers/breaking up fights/putting in dvds/worshipping your coffee) sounds great to me.
Gas Mileage- This SUV does 11.9L per 100km of city driving and a cool, 8.0L per 100km on the highway. By changing to a unibody frame and taking the 2011 Ford Explorer off its truck chassis, it is now much lighter and way more fuel efficient than past models. In 2012, Ford will offer the Explorer with an Ecoboost engine-- my FAVOURITE engine!  High powered- low fuel consumption! THUMBS UP to not doling out the bucks for gas!
Towing/4WD- My testing model did not have the Class III Trailer Towing Package but... being able to tow anything up to 5000lbs is always handy. Take that mini-van! As for the 4WD, always a plus and definitely necessary during most Canadian winters.
Remote Keyfob/Push Button Start- This key initially had me a little weirded out. What happens if this key stops working??   (And i did have a questionable moment in a parking lot when the car told me that my key was not registering--eventhough i was holding it in my hand! EEk!) The 'Mommy' luxury is that the keyfob only needs to be in the vicinity of the vehicle; for a Mommy with full hands walking towards the car, it was really nice that it sensed me and popped open the locks. Phew! Keeping the keyfob in your purse, combined with pressing the brake and the push button, you are easily on your way without having to dig for your keys. (And us 'Moms' all have oversized purses/diaper bags full of cr*p!)
Cargo- Totally suitable and similar to most mini-vans. You may be able to 'camp' inside the 2011 Ford Explorer if back seats are emptied or stowed, but you'd want to be shorter than 6 feet in height (hope that answers your question C?).
Powered Lift Gate-  Again, complete heaven.  An opening and closing trunk door with the push of a button. One step less for me to do.
Blis Cross Traffic Alert (Blind Spot Information System)- This feature was fairly reliable and often told me when vehicles were too close. I'll admit to being an aggressive driver, so i perhaps did not need to be reminded as often that some cars were too close. I knew they were too close...i was aware. That said, if i was a newer driver or wasn't as confident of a driver, these little sensors would be mighty handy.   *One tip Ford*- perhaps those sensors could be a little less sensitive in a parking lot FULL of cars!? They seemed to get a little overworked in this department.
Back Up Camera- Because everyone can make mistakes sometimes... 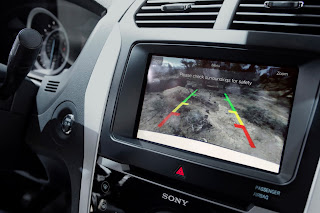 Curve Control- This little feature slows the car down for you... when the curve is too big and you're going too fast! Somethings are idiot proof.
Collision Warning With Brake Support- This feature gives you a warning sound BEFORE you smash into something for real!   Wakeup! That said, hopefully you do not miss the warning... 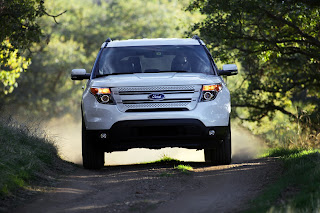 In all, the new 2011 Ford Explorer was a comfortable vehicle to drive and be a passenger in, with many safety worthy features. Like most families, the time comes where you need a car with more seating and *most* times, people choose a mini-van to fit the bill. Unfortunately, as roomy as a mini-van is, i need something that can tow and while i'm at it, i love having 4WD capability-- makes me feel safer. A mini-van, just doesn't cut it for us.
If you want something a little more than a mini-van, Ford has your answer. This cross-over SUV has everything the mini-van family is looking for, including lower fuel consumption. Head to a dealer near you to take one for a test-drive. You may not leave it there!
For more skeptical folk, i'd wait out the 2012 Ford Explorer so that Ford can work out any kinks that may exist.  Next year you can buy the Explorer equipped with the Ecoboost engine and own a vehicle far superior than any other in its class.
Thanks Ford Canada! I have enjoyed the 2011 Ford Explorer test-driving experience and would give serious thought to purchasing one in the future. The safety features you have introduced to the world with this vehicle truly make you top of the line.
Missed parts of our review??

*Peek Thru Our Window was provided with a 2011 Ford Explorer by @Ford Canada for the purpose of this review. As always, the opinions expressed are our own.*

Rebecca said…
We will be buying a new car not THIS fall, but next fall. While this car sounds very cool with all its bells and whistles, I'm still in love with the Honda Odyssey. But, if Ford would hook me up with one of these (totally couldn't afford it, or the Odyssey).....I would be in heaven.
July 7, 2011 at 6:31 PM

Formerly known as Frau said…
I wish I could find a job so I can buy my new Ford. I rode in the Edge this weekend and loved it. Hope you have a wonderful weekend!
July 8, 2011 at 5:19 AM

Heather said…
I'm purposely not reading all your review posts because I don't want them to affect my perception but I'm glad you had fun with it and I CAN'T WAIT!!!
July 8, 2011 at 10:45 AM