The Meaning of Bliss

Last night, was possibly one of the best evenings we've had weather-wise so far. After putting the kids to bed (nice and tired too-- they spent most the day outside!), we retreated to the outdoors to have a fire. Evenings like this are too rare. Sitting inside watching tv would not be on the agenda. 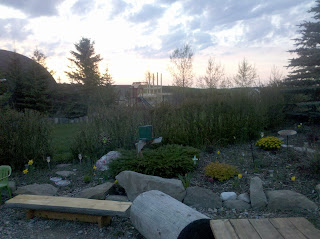 Basking in the evening sky, we listened to the birds chirping. It has taken a few years of work on my part, to sort out the birds living around this house. When we moved in, i was very excited about all the bird houses around the property. Bursting with excitement, i filled them all up and awaited the birds. Well, i handily invited some Grackles... who handily drove all the pretty-singsongey birds away!
It took me awhile to figure it out too. I began to notice the lack of Gold Finches. I told myself that they had simply moved on and that my time of enjoyment was up. Then one day, when i was walking out the greenhouse to water plants, a Grackle swooped at me! I pretended that he did not really 'intend' to swoop on me, but then it happened again one my way back to the house! I vowed that Mr. Grackle had seen his last days around my house. (Note: The Grackle also woke me up every day with his ridiculous hooting and hollering around 5am!)
Running to Google with my issue, i was super excited to find out that the Grackle had a nickname. ( 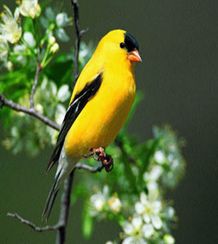 Unfortunately, no pretty-singsongey birds came back that year. They were a little afraid to say the least. But next year, i welcomed them with open arms and a BIG finch feeder, just.for.them!~ The agile birds they are, allows them to stay airborne while feeding, so Mr. Grackle can't get their birdseed. Two seasons in, last night, i realized how many Gold and White Finches i have attracted. They ARE the bird you want around, if you're the type that smiles when you hear birds singing.

With an Alexander Keith's New Tartan Ale in hand, and the glorious fire blazing, DaddyO and i had a blissful evening.

JeanetteSchenk said…
Goldfinches are our favourites here too - the girls love to watch them hang upside down to eat at their feeder. :) Sounds like you had a near perfect evening!

TheFitHousewife said…
Love your view! Who needs tv when you have that :)
We have magpies, millions of sparrows, and a few robins here. I see a goldfinch once in a blue moon.
May 31, 2011 at 7:55 PM