My Garden (oh, how i loathe thee...let me count the ways!) 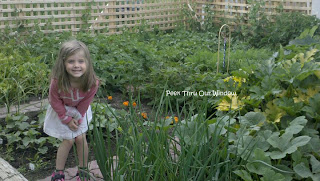 I know that i haven't discussed my vegetable garden and greenhouse at all in awhile. That is because, i just can't.
Mother Nature has not been overly kind to me this summer (um, wth did summer even go?? rain, rain, rain!). She left me with cases of blight, maggotty roots, aphids that would not leave and mad bolting of veggies right to seed! Did you know lettuce tastes super terrible after bolting?? The only thing it has been good for this summer, is to feed the horses next door.
And the deer...oh dear. 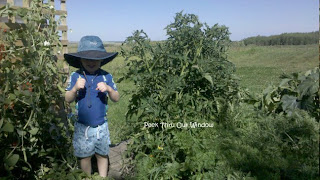 Truly horrid creatures! I had carefully moated the garden full of garlic and marigold, hoping to keep the deer away. For the most part, that did work. Until the end of summer...when they really wanted to get into the garden! Xman is standing next to my prized tomato plants.  I say *prized* because i jokingly planted these tomatoes outside the greenhouse, fully believing that they would, indeed, DIE. While Mother Nature snaked me in other ways, she too seemed to have a fondness and love for these plants. Carefully guarded from the wind, she allowed them to blossom into huge bushes! But, because these plants were a total after-thought addition, i had no marigold- nor garlic- surrounding. And Mr. Deer- oh dear- walked right through them!! It was kinda hard to believe it when i saw it and i only wish i had a picture of said destruction. Guess he really wanted to get at those soybeans!! (Which he so patiently waited to be just-ready to pick-ugh!)
I digress... 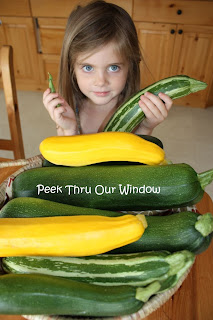 I did manage to muddle out lots of peas, potatoes, carrots and zucchini! But how the heck that stuff even grew is beyond me. Just as the monsoon rains ended, the frost began!~ Since Mid-August, the garden has endured at least 10 hard frosts. NOT COOL. Knowing that pumpkins take more days that Alberta sun is willing to deliver, i started these puppies super early...like March. And once again, good ol' Mother Nature (she's such a bitch sometimes!) showed the wrath of her power! 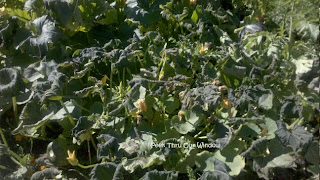 Yucky, wilted, leaves.
Yes, the forecast for that night was not sooooo accurate.
*Sucky*
And then Mother Nature sucker-punched again... this time with some hail!
NOT COOL! 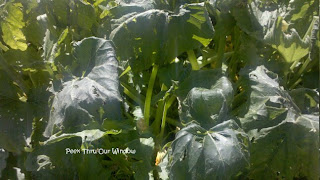 The greenhouse yield was improved dramatically over the previous season. The addition of windows and heat-at-night really helped!!  Helped keep a colony of aphids pretty gosh darn happy, that is! But there were a few spectacular moments...
If i was the type that gave up easy, i'd burn the whole greenhouse and garden down. What a dreadfully, disappointing season! While gardening was a super experience for the kidlets, i am very thankful that i am not a farmer who depends on their crops. I think some heavy duty bribing of Mother Nature would be in order. She clearly is not a fan of mine!
(Case in point-yesterday...) 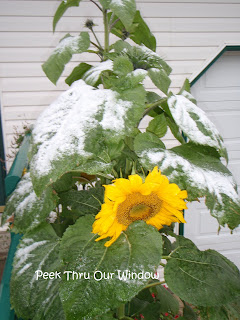 How did your garden do this summer?
Big yield, little yield?
Was Mother Nature kind to you?

Pamela said…
I was thinking it would be fun to have a garden and than I read this and feel the disappointment you must feel SO maybe gardening wouldn't be that much fun.
Sorry to hear it was a crappy year.
September 18, 2010 at 2:56 PM

starnes family said…
Those squash look divine. I buy these all the time from the market, coat them in olive oil and red pepper and then put them on the grill. One of my favorites!

Sorry your garden didn't do more. I know that's frustrating after all your hard work.

Lee Ann said…
I'm sorry your garden didn't do better this year, I know how much work you put into it, hopefully next year will be better xx
September 19, 2010 at 3:12 PM

Teena in Toronto said…
I just had a cherry tomato plant this year. I got tons of 'em in the first month or so with all the crazy weather we had.
September 19, 2010 at 5:36 PM

Unknown said…
Here's a thought....how about covering the whole garden with greenhouse, keeping animals and mother nature at bay next year?
September 19, 2010 at 5:42 PM

Anonymous said…
I have had a similar experience this year Sam! I have lots of small green tomatoes in the greenhouse that likely won't make it through the frost. Everything else parished in the frost and snow. Now we know why it took the pioneers so long to settle here! What makes it worse is when my mom tells me she has so many squash, cucumbers, asparagus, tomatoes, pumpkins and pepper that they can't eat them all,and they just tossed the seeds in the garden and did nothing else. What the heck!
September 19, 2010 at 6:40 PM

Mom vs. the boys said…
I can't keep anything alive, so you will always be amazing in my eyes to even try! I would love to grow pumpkins and let the kids carve them for halloween though.
September 19, 2010 at 8:17 PM

Sonya said…
Oh no..that is just disheartening. I am sorry. I know how much you looked forward to doing it and then to have all that happen just plain sucks.

Mrs. M said…
Well you made a great effort - all I have out in my yard is a few strawberry plants. I totally want to do my own vegetable garden though - someday. I do pick up a box of local produce once a week and have been eating LOTS of squash. :)
September 20, 2010 at 4:03 PM