My kitty cats Riley & Zoey, were lucky recipients of the NEW Royal Canin Selective dry cat food.  Royal Canin has discovered that cats by nature choose their food based on things other than taste.  While humans use taste as one of their stronger senses, for a cat this is not the case.  Cats rely on smell, how it feels in their mouth, and how it makes them feel after they've eaten it.  With three fabulous selections to choose from, Riley & Zoey were off to discover!
~SelectiveTM 31 Aromatic Attraction (maroon dish)

Although cats are carnivores, they first select their food based on aroma. It is designed for the cat that uses smell to primarily choose their food.

Cats are then influenced by the size of the kibble, its shape and texture, as well as its taste. Taste plays an important role even though it is the cats least developed sense.  Two kibble shapes are available.

The sensation a cat feels after having eaten their food, will be a strong contributing factor to their preference.  A more positive feeling will encourage repeat visits.  With protein, carbs and fats in ratio, this food was designed for the cat that chooses his food based on how it makes him feel after.
We were sent the Discovery Pack- complete with three samples of the above formulas (and 3 super cute little dishes!).  Riley & Zoey could hardly wait to get started!
Riley started the taste test~
heading straight for the yellow dish! 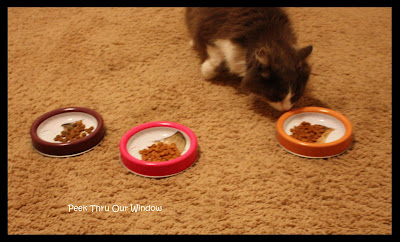 Bypassing the pink dish after the yellow dish was done. 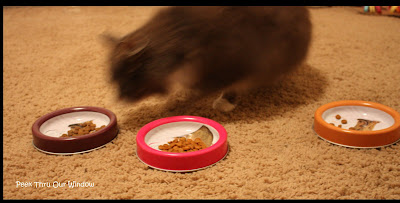 Hmm... maybe she is not the most *fussy/selective* of cats...

She ate everything!
Okay, so that was just Day 1.  Riley was clearly starved or something, as she put away all the different flavours- no problem.  Day 2 and Day 3 were not such 'pig out' fests, and Riley proved to really like the yellow dish- Protein Preference. 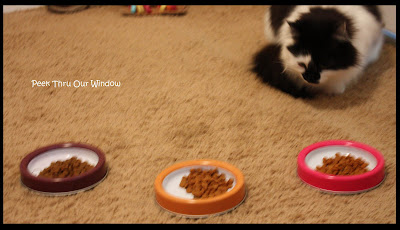 Amazing!  She was that far away from all the dishes, yet went for the maroon dish, containing the Aromatic Attraction.  I guess she's the type that is attracted first by the smell of her food. 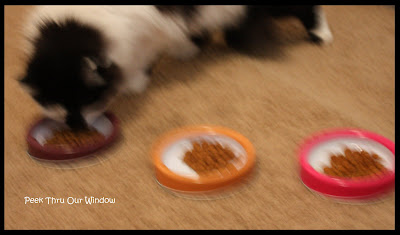 Zoey was not nearly as gluttonous as Riley.  She finished all of the Aromatic Attraction (maroon) and most of the Savor Sensation (pink), leaving the Protein Preference (yellow) tasted but not eaten.  Days 2 and 3 of the taste test would prove that Zoey really did like the Aromatic Attraction formula best- but would certainly not scoff at the chance to eat the Savor Sensation.

I really enjoyed having my cats try out this new food from Royal Canin.  Unless i specifically head to a 'pet food' store, i am unlikely to find a food that contains *meat* as its first ingredient.  Why waste money on unnecessary fillers!  The kids also, enjoyed the experience. 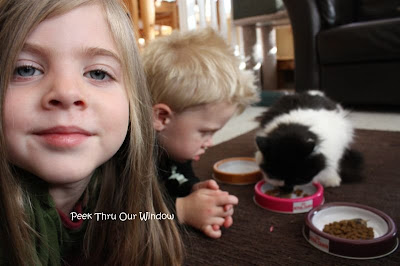 Do you have a kitty cat (or know someone with a kitty cat) that would like to do a taste test of its own??
Simply leave me a comment on this post, telling me a little something about your cat by Saturday, November 6th, 2010  (Canadian residents ONLY).
The lucky cat will receive one Discovery Pack by Royal Canin, plus a coupon for a FREE Large bag of the food chosen by your cat.

Show your kitty some love--or even pass it along to a well deserved cat for Christmas!

*Peek Thru Our Window was provided with 2- Discovery Packs for Riley & Zoey to try out.  We were also given a coupon for a free Large bag of Royal Canin Selective, on behalf of Fleischman-Hillard*

Melani said…
awww they are so cute!

I too have a cat, named Zoe! She is 14 yrs old and I recently have been giving her more and more wet food, I figure since she is old, her teeth are prolly brittle.

Rebecca said…
My cat, so far, has not turned her nose up to anything. She'll even beg for food off of my plate, and when I'm cooking.

She can also fetch. I love having a cat that can do tricks.

Bo said…
Hi Sami,
I have a 2,5 year old Maine Coon named Cyrus and he is only allowed dry food, since the breed has issues with the gums. He is still on kitten food, because of the high protein (he needs that for the growth and for the fluffy tail). He is 8 kilograms now, but will double in size until he is about 4 years old. He loves his treats at night and I am wondering what he would prefer if I offer him all these choices. Probably he will go nuts!!

Rebecca said…
Oh Bo, I have such fond memories of a Maine Coon! I had a Maine Coon cat. He was the best cat ever. Super long extremely fluffy tail and the tufts of fur coming out his ears.....He was awesome. Merlin. His name was Merlin. I miss that cat. He was huge
November 2, 2010 at 11:50 AM

Nerissa said…
I'm neither a Canadian resident nor a cat owner but my sister checks both those boxes so can I enter on her behalf? She lives in Vancouver with her Hubby and their cat Shiska. I've never met Shiska but from all accounts she is a wild one. My sister is woken up more frequently by her cat than I am by my 3 kids. She also likes to destroy stuff - especially shoes. She does not like cuddles. Really she sounds like a charmer =). I keep expecting her and my sister to appear on some sort of Cat Whisperer show someday. Maybe its her food - maybe is Shiska won she would chill out a bit!
November 2, 2010 at 12:22 PM