Cute can be very deceiving!! 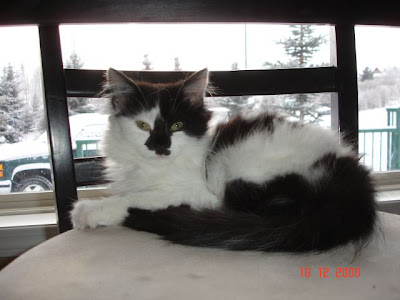 At around 2:30am last night, i heard my cellphone ringing from the kitchen (next to Xman's room). I don't know who the heck it was, but i bolted out of bed to go and retrieve it before everyone was awake!


Since my brain could not figure out what i was standing in, i needed to turn on a light. Upon turning on the light, i could see that one little cat had been up to trouble!! AND yes, it was all my fault! I had been pruning plants etc. the afternoon prior, and had come to the realization that a few indeed were dead. I placed them on the counter where i put the recyclables and had forgotten to take them out to the garage as planned.


Well, Miss Kitty definitely noticed. And knowing her love of plants, i never should have been so trusting. She handily pushed them off of the counter and from what i can tell, the Dragon tree (which she had always shown much love for and is also probably the reason it died) was dragged everywhere through my house!!


I WISH i had taken a picture, because then at least now i might be able to laugh about it! But i guess because i was only half awake, taking a picture was not a priority. I grabbed the broom and dustpan and started to clean it all up. How SUCKY!


By 3am, all was good and i was back in my bed all nice and toasty. Kids and daddy were all still sleeping. Mommy to the rescue once again!

Today, Miss Kitty is following me around like she knows what she did. And i bet, she does--if it hadn't been 2:30am when i found all this dirt, Miss Kitty just might have got a good chasing around the house and some gratuitous swear words thrown at her. Saved by the darkness this time.


AND i am still finding dirt!!


Hope Miss Kitty had fun... i certainly have not.

Dee said…
Awww, Sami, does not sound like fun. Based on your initial description, at first I thought it was a house full of cat barf or something. So on the bright side, it could have been worse, right? :)
October 21, 2009 at 10:03 PM

Unknown said…
Well, let's just say that after my ducts get cleaned today, and the carpets steam cleaned tomorrow...i'll feel better! (Good timing at least--these appts have been booked for awhile)
October 23, 2009 at 10:54 AM