*Thanks to Ian of the BeerGeeks for naming this blog post i was cooking up.*
I am sure many of you have heard how our Canadian city of Vancouver, hosts to Game 7 of the Stanley Cup, (and later losers of the cup), raged in the streets after the game. Rioting, fires, vandalism etc- showed our outrage at losing. Sheesh!! Sorry about that folks, *most* Vancouverites do NOT act like that -- most lose in style with grace.
Anyways, all over the newspapers today are pictures of the horribleness. Vandals posing proud in Canucks jerseys; calling themselves fans. And then there was this picture: 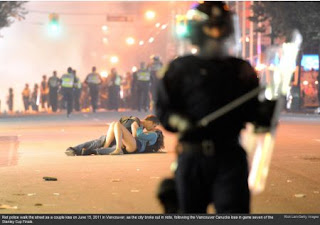 photo Rich Lam- National Post, June 16
What to say about this picture? Hmm... WHAT is their story? Did they JUST meet and figured hey, let's get it on?? Or, are they already a couple and just couldn't take the action somewhere else?? I have all these questions about these two people!
If anything, all i do know about them, is that what they were doing was WAY BETTER than what others in that street were doing. At least they'll be remembered for this odd picture and for being LOVERS, instead of HATERS.
If you wish to see how seriously stupid ( < insert > some appropriately ridiculous word for their actions) some fans were last night after the game, check out this link HERE.

Concrete is hard! And COLD! Seriously??? Why didn't this stop the rioters in their tracks?

Rebecca said…
Is it odd that my first thought was that it's not only people here in the United States who riot after big games?
June 16, 2011 at 4:35 PM

Formerly known as Frau said…
My first thought was get a room....hello the cement can't be comfortable! All I can say is Canadians have a lot of passion...for their teams and each other apparently!
June 17, 2011 at 5:47 AM