The Weirdest Thing EVER

The story i am about to tell you is entirely true. AND i would not believe it myself, had i not been there to see it happen! 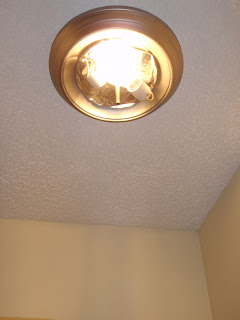 This picture is of the light fixture that is OVER the toilet in our Master Bathroom. Until this particular moment, i had never once...EVER...thought about this happening.

DaddyO was peeing before bed. Bet you all wanted to know that, but for real, that is what he was doing. He was standing up--thankfully, but...

down came the glass cover to the light!

DaddyO had no idea what was happening... the glass thumped him in the head but then continued to the toilet. SMASH!~

The glass cover smashed into the toilet, causing it to shatter into a million pieces! All of it in the bowl or on the surrounding floor, leaving DaddyO shaking his head and fearing to move.

Now, you know how it is...you really do want to make sure the person is okay BEFORE you starting laughing. But i couldn't help myself-- this was absolutely the strangest occurance anyone might have forseen. DaddyO's first words were "Cr*p, i should have caught that!" Obviously, his hands were occupied-LOL.

We cleaned it up, all the while laughing at this random event. And we are super thankful this had not happened to our daughter, who might have never recovered from such a scare.

BEWARE--falling glass may occur while peeing.

Rebecca said…
You should probably write the company and sue them for faulty installation.
June 8, 2010 at 12:37 PM

Unknown said…
After being away, I had lots of catching up to do in the reading department. This one had me laughing right out loud. Poor DaddyO. I can see him checking it out every time from now on for the rest of his life. Hahahah. Rosemary
June 16, 2010 at 6:52 PM