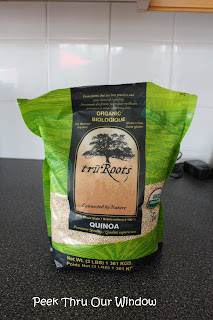 Recently, on a trip to Costco, i purchased a bag of Organic Quinoa. We like Couscous a lot (very similar to Quinoa), but often find it hard to find in a bigger, more economical size. The bag sat on my pantry shelf for a few weeks, while i rummaged up the courage i figured out what to do with it.

Have you ever tried Quinoa??

"Hailed as the 'supergrain of the future,' quinoa contains more protein than any other grain. Quinoa is also gluten free. It is considered a complete protein because it contains all eight essential amino acids. Quinoa is also higher in unsaturated fats and lower in carbohydrates than most grains, and it provides a rich and balanced source of vital nutrients." Epicurious, Food Dictionary.

Verdict: The Quinoa was very easy to cook and only needed a bit of broth to add a bit of flavour. I kept my first-go at it pretty neutral, trying to taste only the Quinoa. A few days later, i added half-can of Mushroom soup (have you ever done that with rice?) for flavour, and the kids really gobbled that up! A few more times in, i've used olive oil and various seasonings (throw it all in there, how ever you feel!?!), or rice vinegar and butter (Super Yum-the rice vinegar makes it go slightly like sushi/sticky rice).

If you have made Quinoa, what do you do with it?

Any kickass recipes i SHOULD know about??

starnes family said…
I don't know of any.....new to the Quinoa world and saw it at Costco recently, too!

CanadianMama said…
I've been using it for years and LOVE it! I make a really yummy summer salad with it:
cooked quonia, cooled
diced yellow and orange peppers
diced tomatoes
diced cucumber
feta
green onions
italian dressing
dill weed
cayenne pepper
(or whatever you want really)
Mix to taste and chill for at least an hour (preferably overnight) to let the flavors blend. SO YUMMY!

Anonymous said…
I'm the only one who likes Coucous in my household, but maybe the mushroom soup with Quino will be a hit with everyone. I'll have to try it. Thanks!
June 30, 2010 at 6:40 AM

Heather said…
Quinoa and black beans is wicked awesome (www.allrecipes.com). I also like to keep some on hand for breakfast! Just cook it plain with water, and in the mornings, heat it up and put berries and honey on top with a splash of milk! It keep you going all the way until lunch, and makes you feel great.
July 1, 2010 at 10:53 AM