Xman Takes Hallowe'en Up a Notch with a Food Drive! #SocialGood @FoodBanksCanada


A few weeks before Hallowe'en, Xman decided that he did not want to go out Trick o'Treating. I was a little surprised at this revelation, but figured things would change over the coming weeks.

A few days later, that morphed into...


"I've thought about Hallowe'en some more and I have decided to go Trick o'Treating after all. Since kids will already be collecting candy on Hallowe'en, I was thinking I could collect cans for the food bank."


And with that, the planning began.

I immediately posted on our community Facebook group to see if our community would be into Xman's idea. We received a very positive response (it was overwhelming actually), so we posted that Xman would be dressed up as a Chef on Hallowe'en night for easy identification. (He ended up dressing as a Butterfly Chef instead... but hey, I was working with a 7 years old, lol!) 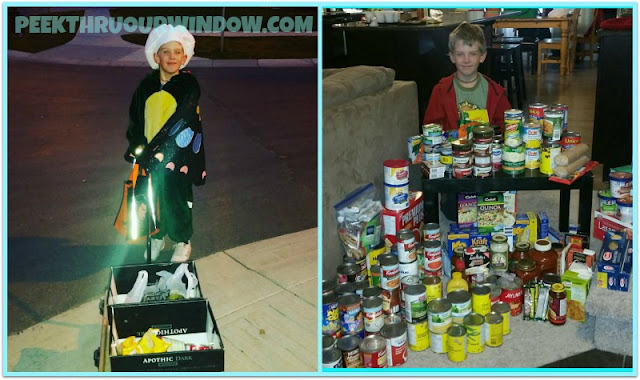 Grandma and I accompanied Xman on Hallowe'en night. We had a wagon, lots of boxes and the car on standby for when we needed to unload. Xman went up to each door with confidence and explained that he was collecting cans for the food bank, and would they like to donate?


Overall, Xman collected 249 items for the local food bank. Our community really stepped up to the plate on this one and I am very honoured we live here.

Xman plans to make this a yearly tradition and wants to recruit other kids in his community to give him a hand. We were not able to do the whole area in one night, so we made some next day pickups for those who still wanted to donate to his cause.


Generation Z has promise in the #SocialGood department, that's for sure!