We Keep On, Keepin' On! #RecoveryMode

In the interest of full disclosure, I feel the need to let you in on our life for a moment. I have struggled with posting about this, because I am not really sure how to get it all out?

Most of you know that last year (2012), I took up downhill skiing so that I could join my family at the hill. It was the bravest thing I had done in many years and I'll admit, LOTS of parts of me were scared to death of this new sport. I sucked it up, endured the baby hill (which was still HUGE!), moved along to the chair-lifts and green runs and can now, competently ski blue runs. (GO ME!)  I have also found a love for the sport that I did not expect... 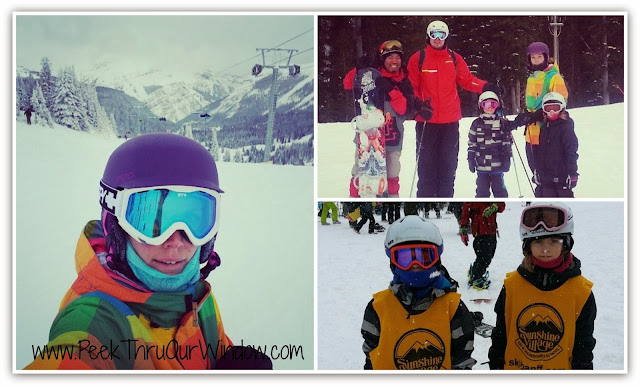 We had taken the kids to Sunshine Village to test out the waters (or snow!) last season, and they loved the day so much we knew it would become our hill. During the Summer we purchased our Seasons Passes to Sunshine Village and like the crazy people we are, we eagerly anticipated the snow. By Mid-November, we were enjoying our ski days, waking early to make first tracks and spending this quality time together as a family.

Then, skiing at Lake Louise for the day with other family ... it happened.

The end of the day, ski hill iciness saw DaddyO's legs splay out from under him (after a jump), landing directly on his knees and doing a face plant to finish.  He tried to get up, but it wasn't going to happen. With the kids just a little downhill from us, Papa Buz skied after them, while I waited on the hill with DaddyO for help. Shortly, a medic with a toboggan came and DaddyO was whisked down the hill to the Paramedics building.

Now... let me tell you, skiing yourself down to the bottom of the mountain after an injury has occurred, was possibly the hardest thing I have ever had to do. (Even harder than trying to learn to ski!) I wanted to get there as fast as I could, to give the kids a hug and to know what was going on with DaddyO-- but, all I knew was that I needed to remain standing.  I could not fall.  I could not get injured. I needed to remain calm.


I carefully followed another woman down the hill who was clearly new to the sport (she could have been me last year).  Each time she zigged, I zagged.  The man-made snow was so crusty and I worried I'd catch an edge...  and the bottom seemed so far away, so far yet to go.

I eventually arrived at the Paramedics building, to find the kids tucked away in the car (Thank you FIL!), far away from all the chaos.  The kids knew DaddyO was injured, but we tried to remain calm so as not to upset them further.  I drove away from the hill that day, just me and the kids... leaving Papa Buz to head to the hospital via ambulance with his son.  I am not even sure how I drove the 45 minutes to the nearby town of Canmore... I remember none of it.

That was the 22nd of December.


On the 23rd, DaddyO had emergency surgery in Banff to repair his very broken knee.  They rebuilt his Tibia/Fibia Plateau, using plates, screws and donor bone. Fortunately, when you injure yourself at one of these ski hills, you might find yourself being fixed up by one of Canada's Ski Team Doctors (the best knee surgeons in Canada). 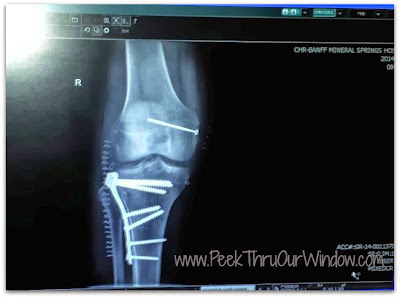 We now live in recovery mode.  DaddyO is to have ZERO weight on his right knee for at least the first eight weeks (on crutches for up to a year), as the surgeon worries than ANY weight on the knee will cause it to collapse.  She says that DaddyO is healing nicely after his first two weeks and that will have to be enough to get us through for now.  I won't lie and say that we're all having a great time with this... while we are thankful that DaddyO will be okay one day, enduring the here and now takes some work.

We have always been a fairly independent family, so asking for help has been a huge thing for us to overcome.  I am so thankful for the people in our community (and family), who have offered us their help with open arms, whenever we need it.

We are all managing.
We are all finding new meaning in our path.

AND, the kids, believe it or not have even requested to go skiing again! So, a few weekends ago MommyO packed up the car and took them to the hill.  All by myself. The kids never mentioned DaddyO's accident, nor did they admit they were afraid at all... in fact, they reminded me just how very resilient kids are. Getting back on the sticks for me was a little scary and somewhat emotional -- if I get injured we are in big trouble!  But mind over matter, we  all picked ourselves up, carried our own skis and had a great day together.

2014 didn't exactly start off on the right foot, but things can only get better from here on out... right?