The other day I took my 4 years old son shopping with me.  I know, I know... I should have forseen the bad in that;  however, my son was an absolute angel.  I needed new jeans and a few other things and I had no choice but to take him with me.  #ThankyouNintendoDS  Such is life.


We were actually accomplishing a lot of to-dos and he was just starting to complain about all the walking.  We had snacked but not eaten lunch, so we decided to share a sub from Subway™.  While we were eating, the mall fire alarm began sounding.  It.did.not.stop for the whole rest of the story.


The alarm was deafening.  There were lights flashing and all.


Xman realized it was the fire alarm and immediately wrapped up his sub and wanted to leave.  I told him that we would give it a minute, as the mall has a lot of people in it and someone might have pulled the fire alarm for 'fun'.  (He starred at me as if to say, "I could do that for fun?")  I suggested we should eat a little faster.  An announcement was soon made stating that the fire alarm was indeed blaring, but that they were investigating.  For the second time, Xman said we should get-out-of-there.


What kind of message does that send to my son who was telling me we needed to get out of the building, "without running Mommy" ?  School has taught him about fire drills and what to do.  We left out the nearest exit to find the firemen showing up and they were heading to the roof.  There was construction going on at the time and it is thought that is what set the fire alarms off. 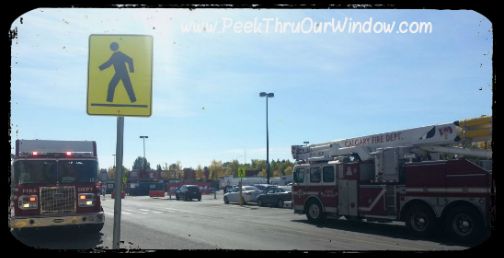 In any case, my son reminded me to not be so complacent in the future.  As an adult, I know that in a mall the chances of the fire alarm being false is entirely possible.  But to my son who is navigating the world, he realizes we should have left right away. So... heads up people!  I did not immediately do the right thing  and should have responded to the alarm sooner.  We want our kids to know what we would expect them to do in an emergency situation, but that actually means doing it!

Why did we all feel that it was okay to ignore the fire alarm?

We were for sure inconvenienced, but rules are made to keep people safe.

What would you have done?