I had never really given much thought about Barbie dolls. As a child, I played with some dolls like Barbie (they were my mom's), but never had 'real' Barbies. For the most part, I was a tomboy who enjoyed playing 'Cops & Robbers' with the neighbourhood boys, so the dolls never really got much play. 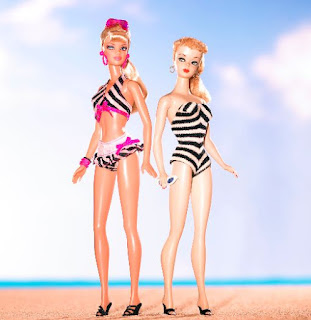 I had, of course, heard all the lovely things about Barbie that may lead a little girl astray in the confidence department.  Barbie is the gateway doll to other things, such as Anorexia and Bulimia. She might also personify perfection, thus making most pre-teen girls feel like cr*p.


Mattel has tried to expand the Barbie line in the past,  to reflect today's realities more accurately. Enter, Tattoed Barbie & Pregnant Midge. The Tatted Barbie *might* make your child want a tattoo, ~sigh~ (Unexpectedly, she's selling ok with little complaints). In my head I am thinking... we'll probably go down that road anyways, so right, okay. However, Midge was actually pulled from the shelves, despite being part of a collection of Barbie's called, "The Happy Family Line". A Barbie that is pregnant by her hubby Ken should be a fine and dandy ideal, but parents complained that because the doll was sold separate from the other family members, it sent the wrong message. They also believed the doll would lead to other questions about the finer details of "where do babies come from?"

People will complain about anything it seems, hard to please everyone.


Like I said, I never gave the whole Barbie thing much thought. Until I asked my daughter what she would like for Christmas and a Barbie is what she said. She currently has a few tiny Disney Princesses that have all fallen apart. They came with little dresses to dress them in, but for a 3 year olds tiny fingers, the dresses have proven difficult. Played with to death, they are broken and the time has come for new dolls. Since we don't have any Barbies, I wondered where Beebo knew of them?


At preschool, unseen to MommyO and DaddyO, Beebo and her gals play with Barbies. The dresses are bigger and easier to put on and they have real hair to brush. They even *gasp* make Disney Princesses in Barbie-size, adding to the fun.


Well, last weekend, DaddyO and MommyO had a bit of a date night. On our way to our night of fun, we decided to do a little Christmas shopping (Read:I almost never get to see the toys before buying because I do so much online shopping! Why take two kids to Toys R Us?? Shipping is not that expensive and results in no meltdowns at the cash register by said children). We were there to get a Barbie or two, but found ourselves to have become....um, how shall we say it??

"When did Barbie start looking like such a sl*t!?" said DaddyO.


We tossed Barbies aside with reckless abandon....we did not want these Barbies for our daughter!! Of course I'd expect to find a Barbie dressed in a bikini--as in, "Beach Barbie", but we found LOTS. Some Barbies wore such little clothing, or such trampy clothing rather, that I was actually disgusted.

Was Barbie always like this and I just never realized?


Finally, those things that you just don't get as a child, all made sense. This is what critics of the Barbie doll saw! My child-eyes could never have realized how inappropriate most of the Barbie dolls actually are.  And don't even get me started on the Ken doll... what a dork!  Choices for Ken were: A Pink Tuxedo (cause all men like to rock a pink tux!), A Baby Blue sweater vest with khakis and Surfer Ken.


We did find a Barbie doll to come home with, but had a good laugh at how strong our feelings were about doll clothing--lol! And perhaps, just perhaps, this was our first real moment where we realized WE ARE parents.

It only took buying a few Barbies to knock it all in!


Does your little girl play with Barbies?

What do you think about the 'issues' surrounding Barbie play?

*This post has been reworked, but was originally posted on Peek Thru Our Window on December 1, 2009.*

Lee Ann said…
We are heavily into Barbie land over here. K's barbies for the most part, have been bought second hand or as gifts. Some clothes been a little on the tight side but never trashy, some clothes are 70s handmade flowing dresses and flairs. Recently my Mum bought her a pack of three, they are wearing short dresses and trashy shoes.
But K hasn't really even noticed, Barbie plays many roles, cook, mother, dog owner, she wears wedding dresses to the swimming pool and the trashy dresses to drive her little sister to ballet. The childhood innocence seems to prevail, she doesn't understand the "tone" of the clothes, it is just another outfit change for Barbie.
November 15, 2011 at 1:45 PM

Formerly known as Frau said…
I bought Barbie's for my girl and didn't really think much about it ....she liked pink and Barbies are pink everything......she is now 17 and still loves pink and knows real women are not like Barbies.
November 15, 2011 at 2:25 PM

ayersfamily said…
Our rule of for raising girls is the longer you can keep them little the better. Girls are always wanting to be grownups like mommy, so the more you can delay things the better. When my girls started to long for Barbies we kind of redirected them into American girl dolls. Which I know are pricy, but grandma pitched in and we read the books from the library. The books are awesome, historical, and really good. Yes, they wanted and played with Barbies, but we held it off as long as possible!
November 16, 2011 at 9:23 AM

Heather said…
Hannah has barbies and princesses and dolls galore. We have a large family and the toys just fly in and we can't stop it. She hardly plays with the barbies and is more interested in what 'profession' they are than what they are wearing. I don't think it will be an issue - I mean, we are so aware now that we can combat the 'drawbacks' with education. I talk to Hannah all the time about what she sees on tv - no difference with toys imo.
November 21, 2011 at 10:29 PM

John Mayberry said…
This is SO true! As a father of all girls me & my wife have had that exact same thing happen. Only to later reflect saying "we must be getting old"! Great story, made me laugh!
November 22, 2011 at 5:23 PM