The Baby Squad Returns! "Baby Geniuses and the Mystery of the Crown Jewels"


The Baby Squad is back!


When the valuable Crown Jewels disappear, it is up to a band of height-challenged heroes to travel overseas and catch the thieves before it is too late! With appearances by Jon Voight as a 'Cab Driver' (in 4 different countries: England, France, Italy and Germany) and the personalities of Skip (Baby Squad Leader) and Gabby (Fashion Expert), this movie about genius babies solving crimes and 'acting' like adults is sure to bring laughs. 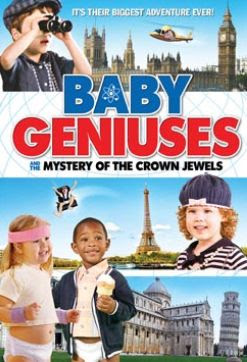 "Hidden beneath Bobbins Daycare in Washington, D.C is the top-secret headquarters of The Baby Squad, where super genius babies use their secret baby language to solve mysteries all over the world. And when an evil genius baby steals the Crown Jewels from The Tower of London, the toddler team- along with Aunt Kylie- zaps across the globe to investigate. It's a mission filled with amazing gadgets, awesome inventions, international intrigue and hamburgers, too. But can a pint-sized mastermind with a huge plan for world domination outsmart our government's brainiest diapered detectives?"


While "Baby Geniuses & the Mystery of the Crown Jewels" wasn't really my cup of tea,  Beebo and Xman thought it was rather hilarious.  And it was about spies... which, if I haven't mentioned, my kids are obsessed with being spies as of late. The overall language of the movie was mostly suitable (it sports a few OMGs and 'Duhs') for my 5 and 6 years old, and it was low on violence/sex/nudity which is always a plus.

A fun flick for sure!