Let's clear this up straight off -- I am no Pinterest Mom. While I do like to browse Pinterest and pin interesting things that one day I will hopefully get around to making, I more often than not, never attempt said Pinterest things.

The same can be said for Buzzfeed Tasty videos. I share those recipe videos a lot on my Peek Thru Our Window Facebook page for inspiration (yours and mine!), but how many of them do I actually ever try to make?? Nada.

So... because I had a certain someones 11th birthday sleep-over party coming up, when I saw this fun, colourful So Yummy treat in my Facebook feed I thought, WHY NOT!?

First, the video of how to make 'Unicorn Hot Chocolate' --

And made of all the things that 11 years old girls adore... rainbows, candy and UNICORNS!


Whipping this up like it was no big deal would win me accolades from the troops and maybe even a Mom-of-the-Year award (albeit it self professed). THIS would be talked about for the next decade and it would be hard to top!

I took Beebo to our local Bulk Barn to pick up the candy supplies we'd need, popped into the Dollarama to buy a glass, hot chocolate vessel or two and with the goodness ahead in sight, looked forward to Friday's sleep-over. 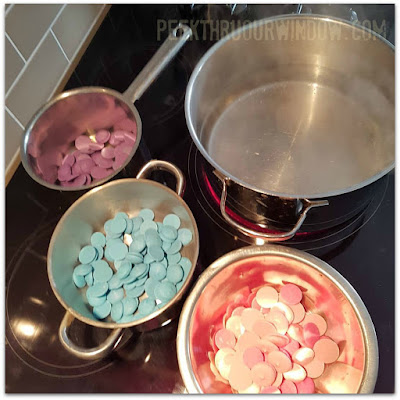 
To put things bluntly, my chocolate melting process could use some work. After the neighbours kid suggested I try the microwave, (because God only knows where this double boiler method was going), I managed to eek out the chocolate bark for the recipe. It wasn't pretty, nor did it happen at all like it does in the video above, but step 1 was done.


Step 2 sounded easy in theory ,but like I had previously mentioned, my chocolate melting skills are sub par. It is 100% completely possible that I melted the chocolate to be way too runny in consistency, so getting the pretty star candy to stick on the rim of the glass was a bit of a chore.


Because the first and second step had already reminded me that I was perhaps in way over my head, I skipped the boiling of the strawberries and decided to use Strawberry flavoured syrup instead. Step 3, done.


For the finale, each glass of hot chocolate was topped with whipping cream (yes, from a can), some more sprinkles and the chocolate bark from Step 1.


Would I make this again?

But I would perhaps give a new recipe a run through next time, so as to avoid any swearing in front of my guests.  Enjoy!